The Altiplano is a stunning alpine plateau, formed during the uplift of the great Andes Mountains long ago in the South American continent. The extensive plateau comprises of multiple fresh and saltwater lakes as well as an enormously impressive salt plain – the infamous Salar de Uyuni. Salar de Uyuni is, in fact, the world’s largest salt flat at a whopping 12,106 square kilometres.

This image won a LUX Gold Award in Spain in November 2014, the most important professional photography competition in my home country. I will happily admit, I am incredibly proud of achieving such an accolade!

The challenge of shooting iconic locations like Salar de Uyuni is finding a fresh and unique approach that somehow reaches beyond what has been accomplished before. In the time leading up to this trip I formulated a specific vision in my mind of what I wanted to achieve in this location. I studied the area and the work of others and essentially, I previsualised the capture then remained focused on the outcome throughout the trip.

I only had one full day at Uyuni and that morning at sunrise I could not find the foreground composition that I had in mind, the one I had previsualised with a strong marked hexagonal line following a diagonal.

There were also a lot of 4WD wheel marks on the salt hexagons in the area where we parked that were ruining the picture. In fact, there were so many 4WDs driving around Uyuni that it was very difficult to find a location without marks at all (…and it would have been a very tedious task to clone all of them!) When I was taking the photograph at sunrise, my driver took off and parked the 4WD a few hundred meters in front of us inside the set-up shot. Initially I wasn’t happy with that as my preference was to photograph a pure landscape without any human elements. On reflection, I decided it was actually an important element of the image that provided depth, perspective and scale and I so I chose for it to remain. As I said, I wasn’t completely happy with the shots I took in the morning so I asked the driver to take me out there again for sunset. I was the only photographer on the tour keen enough to come back to the salt plains again for a sunset shoot. We had to look for a while until I found what I wanted and then we waited for the sun to set…

From the two shoots collectively, I finally had all the elements I needed to bring the image I had imagined together.

This image possesses a wonderful mix of leading lines, a very elegant and sensual colour palette and an engaging sense of perspective. Let’s explore some of that further…

One view of successful photography is that it somehow creates a sense of order out of what can often be a virtual field of chaos within a scene. This usually involves isolating key components and being very definitive about their placement and interaction within the frame. This can sometimes be accomplished in a single capture by thoughtful positioning, research and patience, yet in this case, I also used some of the tools at my disposal in postproduction to align it compositionally.

I like to feel that I make images instead of taking them. For the final image I used compositing to add and move some of these key elements to match the image I had previsualised. I will talk through this process as we go on.

The foreground is presented as the largest structural component of the image and is certainly what first demands your attention. After spending some time with the image, you slowly begin to ascertain the significance of smaller and more subtle elements of the image the back of the frame – being the island and the car. This technique intimates the delay and the reveal, the initial impact and the delayed reaction to other more hidden elements. It adds a level of visual and narrative sophistication to the image and is a technique I often use in my award entries.

Leading lines, direction of light, perspective and focus all have a significant role to play in the ultimate success of this image.

Our visual mind is easily engaged by graphical features and leading lines are one such tool. We can use them to structure an image and direct the viewer’s eye. In this case the diagonal line from the bottom left to top right is used to sweep the viewer much deeper into the image to reach the additional points of interest of the island, vehicle and colourful skyline in the background.

The direction of light, highlighted by the low angle at that time of day, accentuates and emphasises the edging of the encrusted salt lines, giving them more of a presence and adding to their effectiveness in directing the viewer.

Compositionally, you might argue that the image would have been stronger if this diagonal line had led from the bottom right corner to the upper left of the frame where the island and car are placed. I did consider creating a vertical flip of the foreground or moving the car and the islands to the right-hand side of the frame to align with this. However, I decided that was perhaps slightly too predictable a composition plus I also enjoyed the way this positioning invites the eye on a subtle circular sweep from the front through to the points of interest in the back of the frame.

A photograph has only two dimensions. Depth comes from giving the impression of a third dimension, which does not technically exist in a photograph. Consequently, we need to use what tools and techniques we can to simulate depth.

Perspective is one of the methods we use to create depth. It refers to the relative appearance of objects in space and their overall relationship to each other. Wide-angle lenses, such as what was used here, have a propensity to enhance linear perspective. They introduce distance and movement into the image by showing what is close as well as what is distant at the same time. This adds visual depth by creating a clear foreground, mid ground and background and encouraging the viewer to walk through these layers of perspective into the back of the frame.

Optical sharpness or focus is another tool used here to gently add to this sense of linear movement. In this case it is emphasised in the foreground and on the leading lines, giving us an excellent and clear starting point to then move towards the softer background.

I was shooting at f13 and I didn’t have time to focus stack, so some the corners came out a little softer than I’d generally like. As a result, I used some selective sharpening techniques in Photoshop on prominent diagonal line in the foreground to further emphasise its presence and directional influence.

Sunrise and sunset generally offer the greatest potential to encounter a light pastel colour palette. The softer hues encountered at these transition times of day often imbue a sense of softness, gentleness and harmony.  The cooler blues of the sky and warmer hues of orange and magenta are wonderfully complementary on the colour wheel and are a very visually pleasing combination. Complimentary colours tend to play a key role in my work. Salar de Uyuni is a unique place and has all the potential as a world-class subject for landscape photography. However, the elements will not necessarily present and align themselves for you. You have to work for it!

This image has a fairly simple, yet strong composition. The square format works well with the marked diagonal lines. Collectively, the straight horizon line gives a sense of stability within the square frame and the diagonal lines work to make the image more dynamic.

The positioning of the horizon comes close to following the natural rule of thirds and both the 4WD car and Fisher Island are located at a hot spot where the vertical and horizontal thirds line intersects. This draws the eye of the viewer more powerfully and strengthens the balance of the key elements. With my framing I decided to place the horizon line in the upper area of the image to give more emphasis and space to the unique features of the hexagonal salt grids in the foreground. Although it was a beautiful sky, the greater emphasis on the foreground gave the image the overall structure I was looking for.

Composition might come intuitively to some photographers, but the vast majority will have to study it to develop a deeper understanding of what works well and what does not. Once you have a strong grasp on composition, you will have more confidence to abandon the rules and come closer to following your vision and expanding your own more personal style.

Like with the previous image of Spa Pool, this is a great example of an image that follows the Golden Spiral. The Golden Spiral helps the viewer flow through your image on a journey of exploration along the sweeping curves of the spiral following the main diagonal and experiencing the key points of interest in your image all the way to the 4WD and islands in the background. This image scored well in the NSW and Australian Professional Photography (APPA) Awards. Though to be honest, I was actually a bit disappointed the image did not score a little higher than it did. Judges commented that the final print had issues with softness on the edges and one of the judges also commented that they did not like how the clouds on the right-hand side were sitting within the frame. I took this into consideration and decided to act on their feedback to improve the image. I refined the sharpening where needed and further processed the sky and clouds by adding Gaussian Blur Filter and Masking in Photoshop to simplify and soften the sky.

You can see the final version below. Final image softening the clouds with a Gaussian filter in Photoshop 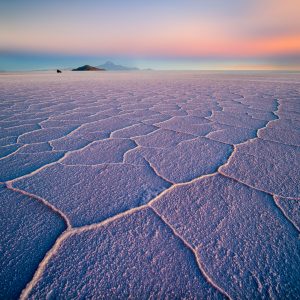